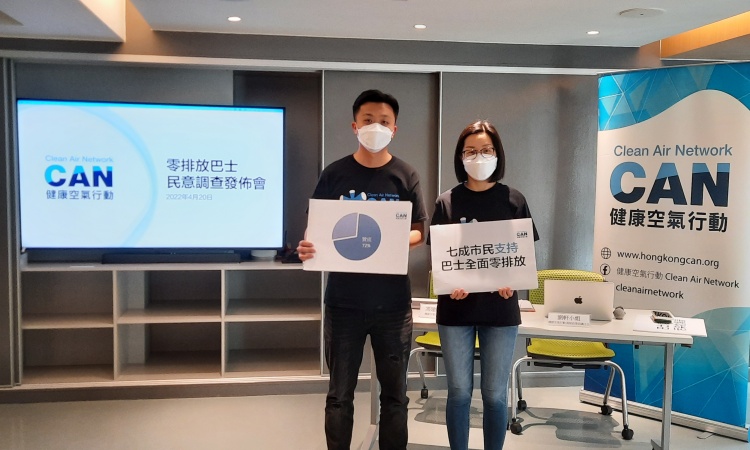 Clean Air Network (CAN) commissioned the Hong Kong Public Opinion Research Institute to conduct a survey in November 2021, which found that 72% of the interviewed Hong Kong citizens supported transforming all franchised buses to zero-emission vehicles, and nearly half of the respondents wished to see at least 50% of the franchised buses switching to zero-emission vehicles by 2030.

The survey was conducted during the period of 15 to 18 November 2021. A total of 1,008 Hong Kong residents aged 18 or above were successfully interviewed, including 506 landline and 502 mobile numbers.

When asked about their views on switching all franchised buses in Hong Kong to zero-emission vehicles, most respondents opted for “strongly agree” (46%), while 26% of them indicated they “somewhat agree” – by adding up the two figures, it is revealed that a majority of 72% of the citizens were in favour of the topic. Only 9% of the citizens expressed opposition.

Nearly half (49%) of the citizens stated that at least 50% of the franchised buses in Hong Kong should be using zero-emission vehicles by 2030, while 9% of them said “the earlier the better”.

Most citizens (46%) said that the SAR government should bear the greatest responsibility for the full transition to zero-emission buses, while bus operators ranked second (24%).

The results of the public opinion survey indicated local citizens were aware of the impact that roadside air pollution has on the health of themselves and their families. Roadside air pollutants, including PM10, PM2.5, and NO2, mainly come from car emissions. Taking in those pollutants could lead to respiratory and cardiovascular diseases, and even cancer. Children, the elderly, and chronic patients are particularly susceptible. Commercial vehicles, such as buses, trucks, and taxis, contributed to over 90% of the roadside air pollutants emitted by cars in Hong Kong, hence, the implementation of zero-emission commercial vehicles will benefit public health greatly.

As shown in the survey results, the majority of the citizens in Hong Kong, 72% of them, was very supportive of switching all franchised buses to zero-emission, whereas merely less than 10% of them indicated opposition, demonstrating a consensus on the issue. Almost half of the citizens wished that at least 50% of the franchised bus fleet will become zero-emission by 2030, and nearly 10% of them hoped to see that as soon as possible. Citizens have also indicated that the responsibility lies with the government.

Unfortunately, government policies fall short of citizens’ expectations. As of 2020, merely 0.6% of over 6,000 franchised buses in Hong Kong are electric. If the ratio is to rise from 0.6% to 50%, which is the demand citizens voiced out via this survey, much needs to be done. Yet, the government is not planning to lay out a roadmap for zero-emission commercial vehicles earlier than 2025.

Worse still, the Steering Committee on Promotion of Electric Vehicles, set up in 2009, comprised of Secretaries for various bureaus under the leadership of the Financial Secretary, “concluded its work” in September 2021 and left it to the Environment Bureau to follow up its work, undoubtedly downgrading the level of policy coordination even though its achievements remain unremarkable.

The government has been saying a timeline will be available after finishing the trials that are taking place. However, without an operational trial of a significant scale, it is impossible to understand the feasibility of using zero-emission buses in Hong Kong. Bus operators are now subsidized by the government to purchase electric vehicles via the New Energy Transport Fund and the Single-deck E-bus Trial, but the former, since its launch in 2011, has only supported the acquisition of 4 electric double-deck buses, and the latter only 36 single-deck buses. Furthermore, for the trials to be successful, infrastructure and technological support that ensure service level remains unaffected are essential, and these rely heavily on government resources.

For the sake of public health and alleviating the climate crisis, zero-emission transportation has already become a global trend. It is also a part of the national development plan – the 14th Five-Year Plan vowed to push forward the development of new energy automotive industry – which the Hong Kong government should also follow.

To bring about a zero-emission bus fleet, the government has to take up leadership and push forward cross-bureau coordination. CAN urges the CE candidate to respond to public demand and incorporate the following policies into his platform:

1) Set out a time-specific roadmap for the transition to zero-emission buses.

4) Remove regulatory barriers, including those concerning bus specifications and hydrogen, to facilitate the adoption of new energy vehicles.