Category: Uncategorised | June 5, 2020
Posted by: Getting Ahead

Clean Air Network (CAN) conducted a study for 2 weeks in March 2020, with the purpose to identify the level of air pollution concentration (Nitrogen Dioxide, NO2) at 10 bus stops located in 3 main traffic roads in Central District. It is considered the first study after the emission standard of the Franchised Bus Low Emission Zones (FBLEZs) was tightened in December 2019.

1. Findings show that the most polluted bus stop located within the Franchised Bus Low Emission Zones (FBLEZs) in Central District which was as high as 3.5 times of the World Health Organization’s recommended safe level. Commuters who queue at bus stops are at risks as they are exposed to dangerous level of roadside air pollution. Exposure to high level of air pollution will lead to health consequences of respiratory or circulatory system.
2. It remains doubtful the effectiveness of the current FBLEZs to protect public health if the standard is not further tightened. Since 31 Dec 2019, franchised bus companies were required to deploy buses meeting Euro V or above emission standards to routes running through the three FBLEZs in Central, Causeway Bay and Mong Kok districts.
3. To reduce the exposure and health risk of all population, CAN strongly urges the Government to tighten the standard of the FBLEZs, include the planning for Zero Emission (Franchised) Buses
in the EV Roadmap, and speed up implementation of the Roadmap.

1. Air pollution (NO2) level recorded at all 10 bus stops exceeded the annual safe level recommended by the World Health Organization.

2. The average air pollution (NO2) concentration for 10 bus stops is 114.3 microgram per cubic meter (μg/m3), nearly three times that of the recommended annual safe level (40 μg/m3). The most stringent target Air Quality Guidelines (AQG) of the World Health Organization (WHO) benchmarks the limiting NO2 concentration at an annual average of 40 μg/m3.

3. Landmark bus stop, located in the FBLEZ in the Central District, was the most polluted among the 10 bus stops in the study. It recorded an average concentration of 142.9μg/m3, 3.5 times that of the recommended annual safe level. 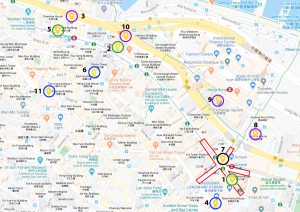 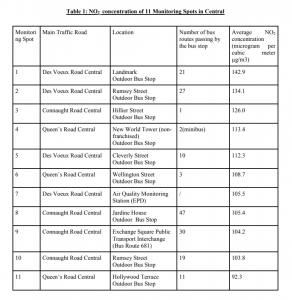 Table 1: NO2 concentration of 11 Monitoring Spots in Central 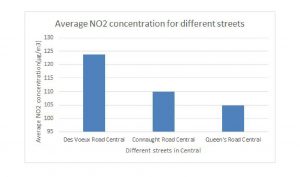 Graph1: Comparison of average NO2 concentration among the three main traffic roads

a) The limitation of Franchised Bus Low Emission Zones (FBLEZs) to safeguard public health
● The scope of the current FBLEZs is limited in terms of geographical areas, types of vehicles regulated, and the emission standard;
● Since the tightened emission standard (to Euro V) was implemented December 2019, the impact on public health gain is not well communicated to policy makers or the general public.

b) Unclear emission reduction goals targeted on Franchised Bus
● It remains unclear when and how the Government plans to significantly reduce the emission from franchised buses;
● For example, there is no target number of bus routes which should be deployed with Euro VI, Hybrid, or Electric (or other Zero Emission technology) buses;

c) Lack of pollution data at bus stops
● The Transport Department is currently conducting non-periodic inspection for air pollution monitoring at PTIs. The data collected is not regularly reported;
● The general public is not able to understand the level of air pollution and thus health risk they are exposed to when queuing in PTIs;

The below recommendations are made in response to the above problems.

a) Improve the Low Emission Zone
● The minimum emission requirement of LEZs should be tightened to Euro VI or above emission standard;
● The Government should conduct a study to investigate how the emission requirement should be extended to other types of vehicles, including medium or heavy goods vehicles, light buses and taxis;
● In addition, the LEZs should be extended to cover more bus routes in Central, Mongkok and Causeway Bay Districts, and expanded to more busy districts, for example, Kwun Tong, Sham Shui Po, etc.

b) Formulate an EV Roadmap that includes all vehicles including franchised buses
● The Financial Secretary announced to formulate Hong Kong’s first EV Roadmap to popularize the use of electric vehicles;
● CAN urges the Government to formulate the Roadmap ASAP which includes transformation to more electric franchised buses;
● The Roadmap should provide a plan to:
1) develop and construct the charging infrastructure in stages to meet the growing needs especially for the public transport and commercial vehicles;

2) engage stakeholders from the public and private sectors in developing different charging options to ensure the practicability and sustainability of these options;

CAN urges the Transport Department to conduct periodic (monthly) monitoring of air pollution at all PTIs in Hong Kong and report the data collected to the general public in
highly transparent and accessible manner.

REFERENCE
Study Methodology
Diffusion tubes containing a chemical reagent to absorb the pollutant (Nitrogen Dioxide, NO2) to be measured directly from the air are installed at 11 spots in Central District over a period of 10 working days in 2 weeks (Saturdays and Sundays omitted). The monitoring covered a period of time from 0730 to 1830 of each working day.
The 11 monitoring spots were distributed along the three main traffic roads in Central District – 3 bus stops at Queen’s Road Central, 3 bus stops at Des Voeux Road Central, and 4 bus stops at Connaught Road Central. It may seem surprising that it was the Financial Secretary who made the announcement on the government’s proposal to formulate Hong Kong’s first EV Roadmap. Some might recall